Rooted in dance, mentorship, and a welcoming space for the arts, Keshet activates community and fosters unlimited possibilities through education, engagement, innovation, and the pursuit of justice.

To celebrate the art of dance and be a welcoming home for the intersection of the arts, artists, and audience; actuating a flourishing environment for empowered individuals, nurtured communities, and sustained equity.

Housed at the Keshet Center for the Arts in Albuquerque, New Mexico, and founded in 1996, the heart of our organization is Keshet Dance Company, a core group of professional dance artists, who creatively feed and are fed by four intersecting areas of community impact: Social Justice through Dance, the Business of Art, Community Dance Education, and Contemporary Dance Performance

The Company consists of movement artists who find their truest selves in the art of dance. The professional dance artists that bring life to Keshet Dance Company brilliantly remove the boundaries between “dance” and “community,” and they can usually be found sharing movement, mentorship, and laughter with each other; with visiting artists; with students of all ages, abilities and spaces; and with communities near and far.

KESHET CENTER FOR THE ARTS

30,000 sq. ft. of pure fun with studios, theater, gift shop, costume shop, community gathering spaces, and wearing the largest mural in the State of New Mexico. Keshet Center for the Arts is proud to be an anchor organization in the Midtown Arts and Entertainment District.

Keshet’s Arts and Justice Initiatives work with a broad range of community partners at the intersection of arts and juvenile justice who envision a future where youth are empowered, and where the systems that serve them are transformed, centering the arts as a way to build the well-being of young people and their communities. Keshet’s work in this area includes:

THE BUSINESS OF ART

The Keshet Ideas and Innovation Community (KIIC) champions the value of the artist and the arts economy. Through KIIC, Keshet:

Immediate Past Board President:

Thank you to these amazing Corporate Fans for your support!

Corporate Fans are businesses and individuals who support Keshet and connect to community members and art enthusiasts through sponsorship of Keshet’s ongoing, virtual and in-person performance season. Learn more by emailing Advancement@KeshetArts.org.

Thank you to these amazing Funders for your support! 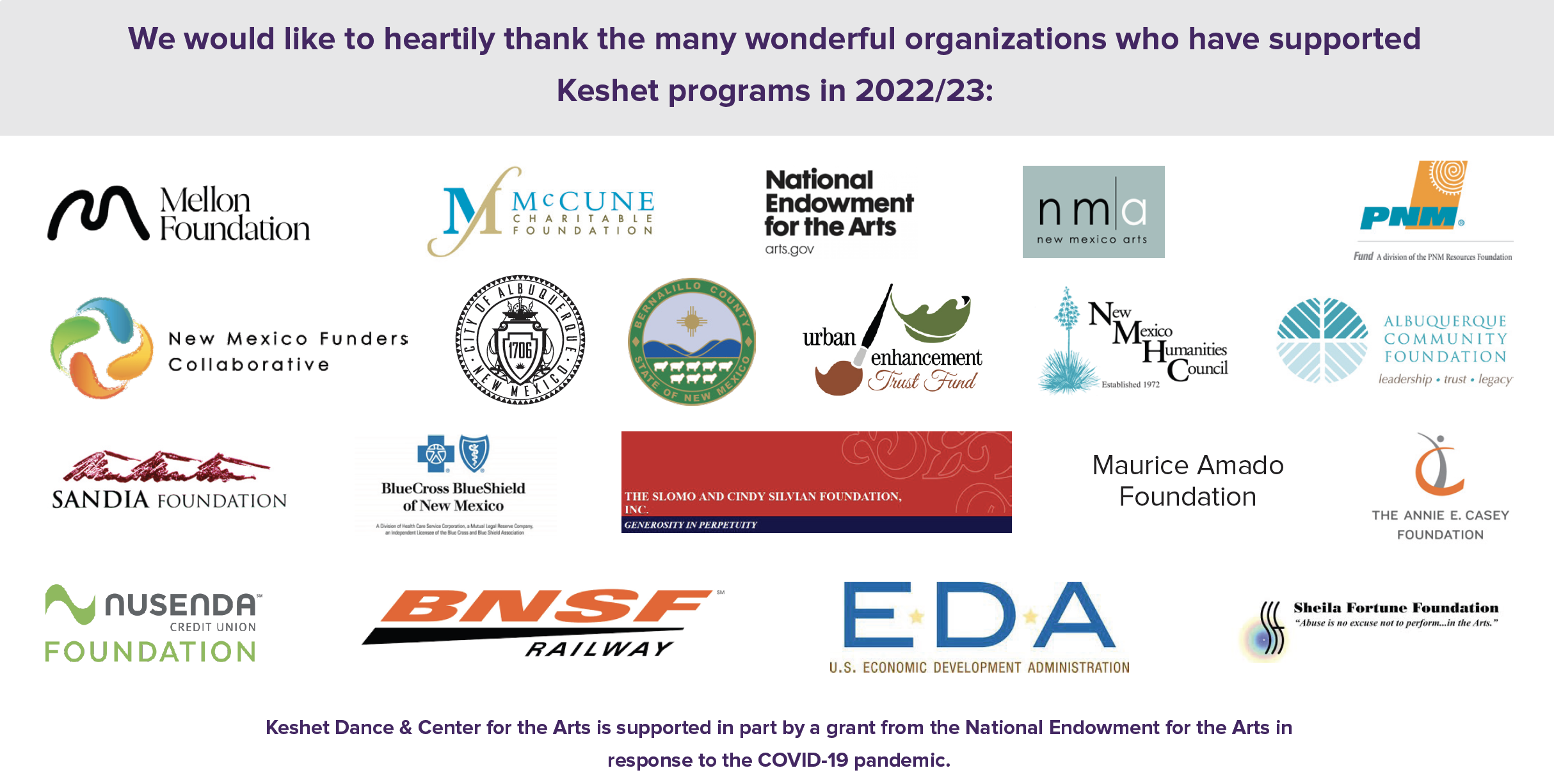 –
Keshet Dance & Center for the Arts is supported in part by a grant from the National Endowment for the Arts in response to the COVID-19 pandemic.

WE TRULY APPRECIATE YOUR SUPPORT!

Keshet (Keshet Dance Company) is a private, non-profit organization according to section 501(c)(3) of the Internal Revenue Code. All contributions are tax-deductible.

THANK YOU TO OUR GENEROUS DONORS

Keshet would like to thank our entire Cast of Characters, especially those in the following supporting roles whose financial and in-kind contributions make a difference in supporting “unlimited possibilities” in Calendar Year 2021 (January 1 – December 31, 2021).

If you made a donation in 2021 and don’t see yourself listed, please send a message to  sebrena@keshetarts.org.

Celebrating Dance & Community: Keshet is the guest of Silverkite Podcast

New Mexico Arts, a Division of Cultural Affairs, and by the National Endowment for the Arts

New England Foundation for the Arts

Doug Moore, in memory of Mom Millie Moore, a lover of dance and musical movies and theatre

Heather Garcia in honor of her Aunt Colleen Grathwol

Andy Greenberg and Alex Wellins, in memory of Philip Greenberg

Abraham and Linda Ettedgui, in honor of Shira Greenberg

Margaret Roberts, in honor of Sage and Rachel Templeton

Janine Tursini, in honor of Adrian Moore Trask’s commitment to the arts!

If you are heading East on I-40 Take the San Mateo exit and drive briefly north (L) on San Mateo. Turn to the west (L) on Cutler – the first street north of the freeway. Continue on Cutler past Washington, and continue just past Morningside, Keshet Center for the Arts will be on your right.

If you are heading West on I-40 Take the San Mateo exit and continue straight…you are already on Cutler! Continue heading this direction (west) on Cutler past Washington, to Morningside.  Keshet Center for the Arts will be on your right.

With support from the Andrew W. Mellon Foundation, Keshet launches the Arts and Justice Network.

Keshet Dance & Center for the Arts was voted the Best Local Nonprofit Brand, by finalist selection through the American Marketing Assoication and then through community votes with the B2B Expo NM.

Keshet Center for the Arts became one of a handful of Choreographic Centers in the nation, and the only of it’s kind to include arts entrepreneur business training in our Makers Space Experience. Ten choreographers from across the USA (arriving in two cohorts) spent 10 days at Keshet Center for the Arts with access to daily rehearsal space, technique classes, business training, and peer support as they developed new work.

Shira Greenberg is one of the first recipients of Women & Creativity’s The Shine Award. The Shine Awards elevate and celebrate the efforts and impact of our community’s women and their contributions to the arts, creativity, entrepreneurship, leadership, and shared vision. Shira was recognized for her commitment to the innovative idea that “dance is for everyone,”  which has transformed Albuquerque’s community, creative economy, and the field of dance through the creation of Keshet Dance & Center for the Arts.

Keshet Dance receives the 2018 MINDBODY Visionary Award for being a business that supports our community and makes a positive impact on every person who comes through your doors, honored at the 2018 BOLD conference in San Diego, California.

With support from the National Endowment for the Arts, Keshet launches the first “Keshet Fellowship for Contemporary Dance” with inaugural Fellow, Silva Laukkanen from Austin, TX.

The 20th annual, and finale run of Nutcracker on the Rocks, is presented at the Keshet Center for the Arts with a 26 show run including beautiful cameo appearances from past cast members over the past 20 years.

Shira Greenberg is a recipient of the 2016 Roslyn S. Jaffe Award, supporting everyday heroes who are making a meaningful impact in communities across the U.S., specifically in the areas of health, education, and social reform.

Keshet presents the Rio Grande Movement Collectors Festival, which is the seed that grows the Makers Space Experience at the Keshet Center for the Arts.

The Andrew W. Mellon Foundation provides Keshet with seed money to codify the M3 curriculum and launch programming in five pilot communities throughout the U.S. forging partnerships between local dance professionals and the local juvenile justice system of each pilot community.

Shira Greenberg is one of five women nationally to be awarded Traditional Home Magazine’s 2014 Classic Woman Award, recognizing extraordinary women who have made a difference in the lives of their communities.

Keshet closes on the property at 4121 Cutler Ave NE in January, and in August moves in, transforming the former soundstage and adjoining warehouse into the Keshet Center for the Arts.

Keshet is awarded $1,000,000 from the US Department of Economic Development for the creation of the Keshet Ideas and Innovation Center at the Keshet Center for the Arts.

Romania’s Ministry of Culture brings Keshet’s Artistic Director to Bucharest to speak with government officials and arts leaders regarding Keshet’s unique arts initiatives and the creation of the Keshet Center for the Arts.

Shira Greenberg, Keshet’s Founder and Artistic Director, is recognized as a Top-Performing CEO by New Mexico Business Weekly, honoring CEOs whose leadership has a positive impact on business and communities in New Mexico.

Keshet receives the Ethics in Business Award, recognizing only one non-profit organization within the state which demonstrates business excellence and the highest standards of ethical conduct, integrity, and civic and social responsibility.

Keshet is nationally recognized as one of 15 youth arts and humanities programs to receive the prestigious 2009 Coming Up Taller Award for its work with incarcerated youth at the Youth Diagnostic and Development Center (YDDC). The award is presented by the First Lady, Michelle Obama, at the White House.

Shira Greenberg, Keshet’s Founder and Artistic Director, receives the Governor’s Award for Outstanding New Mexico Women, recognizing 20 women within the State who have made exceptional contributions and achievements in improving the status of women in New Mexico.

Shira Greenberg receives the New Mexico Business Weekly’s Women of Influence Award, celebrating women who have made a difference in the community, blazed a trail and left a mark on New Mexico business.

The New Mexico State Legislature passes House Memorial 107 “to commend Keshet Dance Company on its dance programs, its educational and social curricula and its provision of mentorship relationships for incarcerated and paroled youth, all aimed at reducing juvenile recidivism rates.”

Keshet becomes one of only a handful of dance companies within the country to offer full-time employment and benefits to professional dancers and staff. [Only 5% -9% of dance companies in major metropolitan areas are able to pay salaries to their dancers – Dance/USA]Shira Greenberg is named one of New Mexico Business Weekly’s 40 Under Forty, recognizing 40 professionals under the age of 40 in the State of New Mexico who “stand out in their fields and are engaged in their communities making New Mexico a better place to live.”

Keshet is awarded the New Mexico Women’s Forum LEAP Award (Leadership, Empowerment and Advocacy Program), presented to only one non-profit organization within the State of New Mexico annually.

Keshet is one of only two recognized programs nationwide by the Peter F. Drucker Award for Non-Profit Innovation for innovative programming – “creating a new dimension of performance and changing people’s lives.”

January 25 (FBG) – Keshet Board and Staff is restructured to insure a focus on mission and programming.

Keshet moves to 214 Coal, which will become its home for the next 13 years.

The “Keshet Center for the Arts” business plan is written, mapping the future plans for the organization.

Shira Greenberg discovers the 214 Coal property for lease and begins bugging the realtor, which will continue for the next 3 ½ years, until Keshet finally gets to move into that property.

Keshet premieres Shira Greenberg’s Nutcracker on the Rocks at Rodey Theater, with a dedicated cast of 13 dancers, some crazy crew members, and a whole lot of shenanigans.

Therefore, as a committed ally and as artists, Keshet Dance and Center for the Arts wishes to acknowledge and recognize the Indigenous people and place where we stand, and the traditional, contemporary, and future lands of the Pueblo, Ancestral Pueblo, Navajo, Apache, and other Indigenous peoples who have had, and will have, a presence in New Mexico and who have in the past, and will in the future, travel this land.

We give gratitude to the land itself and the people who have stewarded it throughout the generations.

We pay our respects and honor their ancestors past, present, and future, and recognize their continued existence and contributions to our society.

We would also like to acknowledge the many peoples who did not arrive on this land by choice. We welcome everyone, however you arrived here, in this space, today and always.

Please take a moment to honor these ancestral grounds, to reflect on the complicated history of these lands which we gather on today, and to celebrate the resilience and strength of the peoples of these lands.

Thank you to the Indian Pueblo Cultural Center, Tricklock Company, and the New England Foundation for the Arts / National Dance Project for their contributions to the development of this statement.

Use the social media icon quick links in the header and footer of each page. 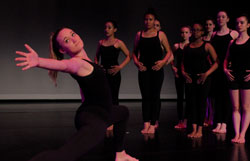 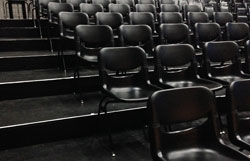 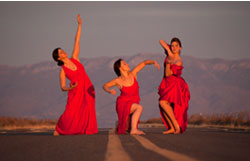